Patrizi, A pillar of Norcia history

The Nursin method of meat processing carries a long history.  There have been indications of pork meat processing and preparation dating back to 500 BC, which are displayed today inside the Castellina Museum.

During the first century AC, in the age of Roman emperors Vespasianoand Titus (son of empress Vespasia Polla who was actually born in Norcia), this region gained the reputation as key region in entire Roman empire for its swine livestock farming and meat processing. In fact there was a profession called ‘ilnorcino’ which even today stands for the professional who is specialized in manufacturing of pork products.

Starting from eighth century AC, Norcinsstart to emigrate further to other regions of the Apennine peninsula and Europe, carrying their precious craftsmanship generation after generation. A curious fact is that they also contributed to modern surgery and anatomy, as Norcinsused some of their animals for experimental purposes, expanding their knowledge. 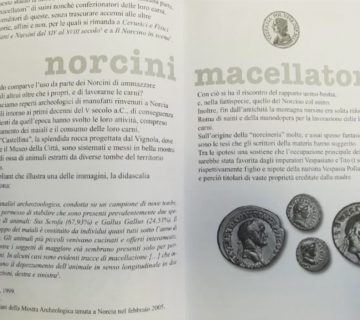 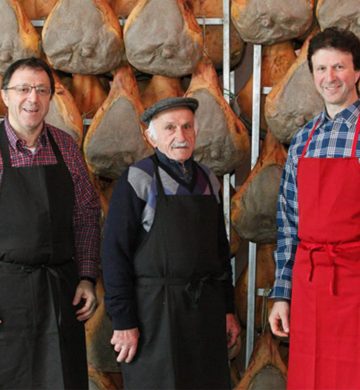 In the Cataldi family all men and women have practiced the art of the ‘Norcin’ craftmanship, and passed it to their offspring.

Nonno Mario, born in 1928, for example each winter would move to Rome where large gastonomyowners would hire him to prepare the meat while in the summer he would go back to his hometown to take care of family land and his precious livestock.

And so he carried on for many years during which also his sons Davide and Agostino did the same, until in 1979 a key decision was made.

In fact in 1979 the Patrizi company was founded thanks to the help and support of the entire family. First two freezer cells and curation area were built then.

The name Patrizi was given in name of AlmerinaPatrizi, Mario’s wife who was the one who year after year took care of the family by preparing food not only for family members, but also the ‘extended’ family -all employees of the Norcineria.

In 1990 a further construction work was done and expansion, allowing the Patrizi company to steadily continue with research and optimization of product quality , while maintaining original traditonalmethod in careful meat selection and use of natural ingredients and flavors.

In 2016 last of the five phases of expansion was finished, just before an event that will change inevitable the entire history of this family business.

The tragic earthquake, one of the most catastrophicalin the history of the Norcia region, destroyed the structures, strongly challenging the family’s passion and morale.

However today 3 years later the Patrizi’s company is proud to announce to back on its feet, with even stronger desire to share with the consumers what we excel at: providing moments of absolute culinary pleasure and the unique taste that our products provide.

Situated in one of the most beautiful natural reserves in Italy, Monti Sibillini.